According to new research from the University of Sassari, in the island of Sardinia, Italy, European honeybees have been observed to use social distancing when infected by certain parasites.

This previously unknown bee behavior was recently published by Pusceddu et al. (2021) in the journal Science Advances [1], as part of a collaboration between the Italian researchers and two others in the UK and Germany.

The varroa mite (Varroa destructor) has been plaguing bee colonies around the world for the last century, since its first detection in Japan in the early 1900’s [2]. It lives on the outside of the bee’s body and attacks young larva after being carried into the broad by worker bees, laying eggs just below the skin, and multiply over a ten day cycle.

The new study by Pusceddu et al. aimed to understand whether the presence of Varroa mites within honeybee colonies caused changes in their social organization. Bees have a complex communication system that involves special body movements (“dances”), preening and chemical signals. These inform each other about how to find resources, and about threats to the colony. Using these signals, bees maintain a special micro-environment where the queen and larvae are protected, as they grow and reproduce. 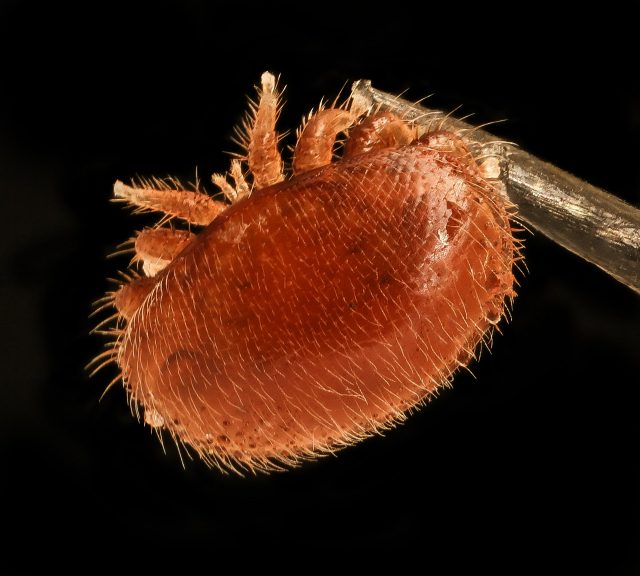 When comparing colonies that were infected with Varroa to those that were uninfected, the researchers found that infected bees changed their behavior. The first thing they observed was that bees from the infected colony were less active in their “dancing” movements.

They also observed that grooming behavior was more isolated to the middle of the hive, compared to the peripheral areas. This was a response to separate the two areas, in a very similar way to social distancing. This behavior suggests that the affected bees not only know they had the parasites but were able to raise the alarm and take measures to prevent it from spreading.

One of the ways bees can detect the presence of Varroa is believed to be by temperature sensing. An earlier study from German researchers [3] found that Varroa infection caused a very slight increase in  temperature, which bees were able to sense. As a result, they adapted by modifying their grooming behavior.

So, like humans, bees are able to use highly sophisticated ways of dealing with threats from parasites, including coordinating the colony to avoid further damage.

previous
The Different Types of Honey
next
How are bees and mushrooms connected?